Why you should stop using folders to organize your creative assets

Folders are great for some things. But they are a terrible way to organize your company’s files. Here’s why: 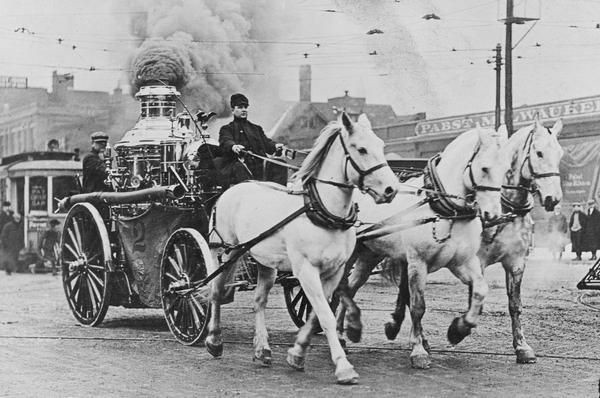 It’s the early 1900’s. Henry Ford is hard at work building a form of transportation, faster than horses. After consulting with a few customers, he decides to stick an electric-powered propeller on the horse’s rear end. The horse speeds up, people get to cheaply upgrade their existing transportation solutions, and Ford becomes rich. Everybody’s happy. Well, maybe except for the horses.

The famous quote “If I had asked people what they wanted, they would have said faster horses” might be wrongly attributed to Ford, but the moral applies.

It’s 2007. The iPhone has just been announced, there’s this new thing called Facebook that’s spreading around, and Drew Houston, founder of Dropbox, thinks to himself — we already have folders for organizing our files, so what we really need now is to put them online. Brilliant, right? Well, yes, but also — not so much.

The issue with folders

Don’t get me wrong, folders are great for some things. They imitate the way we did things in the old days. Take a file, put it in a folder, and as long as you have a system — you can probably find it later.

But — and this is a big but — folders are a terrible way to organize your company’s files. Here’s why:

If you’re using Dropbox for personal use (or Google Drive, or OneDrive, or any other folder-based file storage), you probably don’t have this issue. You might create 5-10 main folders, with a few subfolders under them. That’s perfectly manageable.

However, if you’re a part of a 30-person marketing team, you probably have a bit more than that. Actually, after checking many drives used for creative asset management, we found that a 30-person team usually has a few hundreds of folders and subfolders, some of them four or five levels down the hierarchy tree.

Thinking about it, even in the old days, using folders on a large scale was difficult — that’s why you’re not allowed to put books back in place yourself in libraries, and why police archives always have an archive manager who’s the only one who knows how to get the file.

💡 Using Tagbox’s smart tags can actually reduce the number of labels used by up to 80%, compared to folders.

It’s not only the quantity. Theoretically, if everyone in the company used the exact same naming conventions, it would be possible for others to find what they need. Unfortunately, that’s almost never the case. Different people use different methods and terminology, which makes it almost impossible for others to navigate.

If you’ve ever gotten a link to an unknown drive, you know those 30-60 baffling minutes where you just try to find your way around. And when you need to actually find an image, you might find yourself emailing the person who sent it to you, asking for clues on where it might be.

💡 On Tagbox, the platform makes sure you stay consistent by actively identifying synonyms and typos. For example, we might want to tag an image of a handbag as, well, ‘Handbag’ but if someone already tagged something as ‘Purse’, we’d suggest you use that one instead, keeping everything nice and tidy.

Creative assets usually don’t fall under just one category. While you might be saving your assets by project or photoshoot date, each image actually relates to so many things - the products in it (often multiple products), the photographer, a brand, a sale… It might belong to one team, or many. It might be used in multiple locations. While the options really are endless, your drive isn’t - it sadly only allows one, lonely place to hold each item (unless you want to start creating duplicates. And you don’t).

The single-location issue has two sides - the person saving it isn’t always sure which of the many options is the best place to save the file, and the person looking for it a few weeks later isn’t sure in which location they should look.

Chaos? You got it!

💡 Unlike with folders, there’s no limit to the number of tags a file can have. Linking the content to multiple places at once allows for more flexible navigation, so there’s no need to duplicate content.

The singularity is here

There’s no doubt: Houston created a very fast horse. It was so fast, that all of the big players — Google, Microsoft, Apple — all started making their horses faster as well. They're definitely better than the old, slower ones, but are they really what we need?

With recent advances in AI, and specifically in image recognition, it has become easier to connect information. This works great all over the internet, and it’s how you can find stock images in seconds on Shutterstock or iStock.

What if you went into Shutterstock, typed “Cars”, and got to a main folder with many subfolders in it? That would be so Bananas, wouldn’t it? How would that even work?!

Are your creative assets, the ones you worked so hard at creating, less important than generic stock photos? We at Tagbox believe it’s high time to give you images the respect they deserve. Wanna give it a try? Start here.

Sign up to get the latest stories about Creative Teams and how they work, straight to your inbox.

Thank you! Your submission has been received!
Oops! Something went wrong while submitting the form.